(Reichshof) During an exceptional year 2020, millions of people discovered the bicycle for virus-free transport and sport. As a result of this boom, bicycle tire manufacturer Schwalbe (Reichshof, NRW, Germany) increased sales to 225 million Euro, approximately seven per cent more compared to the previous year. Additionally, the company set new standards for fair trade and sustainability.

“The year 2020 brought us an emotional roller-coaster in all areas of life. Luckily, temporary closures of bicycle retail stores did not result in long-term sales collapses in our industry”, says Frank Bohle, executive partner of Schwalbe. On the contrary, reopening after the lock-down resulted in a jump in demand for bikes and bike parts never seen before.

The bicycling boom had been going on for years, but the Corona pandemic acted as a powerful catalyst, as cycling allows people to commute without worrying so much about the virus. Almost all bike segments experienced benefits – most of all e-bikes, but also gravel bikes, mountain bikes and formerly niche products such as cargo bikes.

Therefore, Schwalbe’s e-bike tire Marathon E-Plus as well as trekking and MTB models were in great demand. This incredible demand resulted in record sales of 225 million Euro for the tire specialist, compared to 210 in the previous year and 187 in 2018. During the period before the pandemic, the family company, founded in 1922 in Reichshof near Cologne, experienced increasing rates of growth. Throughout the past twelve years, turnover almost doubled.

However, the sudden rise in demand for bicycles and parts following the lock-down in 2020, resulted in delivery problems across all segments of the bicycle industry. In May, bicycle stores were literally overrun and warehouses quickly emptied. “The demand was so unusually high, that we had no chance to increase capacities short term. Delivery times still lag behind the need, also with us”, says Frank Bohle. “We have done everything necessary to adjust production capacities to the current development as quickly as possible!”

Roadmap for sustainability and fairness:
Schwalbe uses “Fair Rubber”
Despite the corona crisis and delivery delays, Schwalbe continues to work on its green roadmap in 2020 and lives up to its aim to produce more sustainably and responsibly.

To enter the fair trade market, Schwalbe has partnered with the renowned organisation Fair Rubber e. V. – the worldwide only fair trade organisation for rubber, that directly pays out member premiums one to one to small farm cooperatives in the countries of origin. To date, Schwalbe is the first and only tire manufacturer with Fair Rubber e. V. “We use fair trade rubber for our most popular tire Marathon E-Plus for e-bikes. This proves just how seriously we take our switch to using fair trade rubber!”, says Frank Bohle. Schwalbe’s second tire made of fair trade rubber is now ready to roll on the market: the new Schwalbe Pick-Up for cargo bikes, which are rapidly gaining in popularity as emission-free small transport vehicles.

New company headquarters 2021:
Ecological construction down to the smallest detail
The biggest milestone on the path to a more sustainable company in 2021 will be the new company headquarters, in which Schwalbe invests approximately 20 million Euro. The new building in Reichshof sets new standards for ecological building and a sustainable company philosophy. As far as possible, the materials used are recyclable once they reach the end of their life. For this purpose, a material pass is created for every construction material. Other highlights include electric power generation using solar cells, rainwater tanks, ceiling canvasses for temperature regulation and a green roof garden.

Over the years, Schwalbe has already implemented several green milestones: a tube recycling system that is, so far, the only one on the market – awarded with the German Sustainability Prize Design, Green Compound and GreenGuard puncture protection made of sustainable raw materials and with recycled components as well as the trade fair booth and print materials, which have all been switched to resource saving production methods.

Schwalbe – fully tuned into bike tires and tubes
Ralf Bohle GmbH is, with its Schwalbe brand, the market leader for bicycle tires in Europe. The family business was founded in 1922 in Bergneustadt and employs over 180 staff, who work for Ralf Bohle GmbH in Reichshof, and 60 employees working at five subsidiaries in Europe and North America. Since 1973, Schwalbe has partnered with Hung-A for the production of its tires. In 1993, Hung-A moved production from Korea to Indonesia and, in 2015, opened a second Schwalbe factory in Vietnam. Schwalbe and partner Hung-A are not only a joint venture – they also look back on more than 50 years of close friendship, which is unique in the industry. 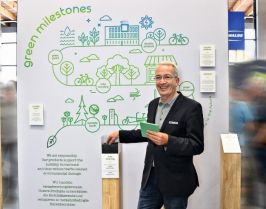